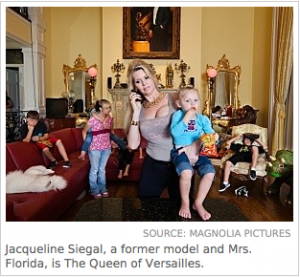 This year’s summer movies includes one about the rise, and bankruptcy, of America’s largest house.

“The Queen of Versailles” (PG, 100 min.) is the story of the couple who built a 90,000 sq. ft. home in Orlando.
The documentary brings to mind the most haunting quote from “Dark Knight,” the current “tentpole” special effects Batman techno thriller everyone is talking about.

Hathaway’s Selena Kyle, aka Catwoman in “DarkKnight Rises,” draps her hand over Bruce in a slow dance as she purrs the quote into his ear.  We are meant to notice, since the scene and voice-over are not just in the film but also in the teaser trailer (“No. 2″).
“There’s a storm coming, Mr. Wayne,” she says.  “When it hits, you’re all going to wonder how you ever thought you could ever live so large and leave so little for the rest of us.”

“Living large” hardly begins to describe the 90,000 sq. ft. home that David and Jackie Siegel were building in Orlando.  Did we mention the 6,000 sq. ft. master bedroom.  Epic “over-reaching” with “crash and burns” applies too.

Jackie is a “passionate shopper,” in her words (and a compulsive “hoarder” in other’s). She spent $1 million in a year on her shopping sprees – until the 2008 meltdown happened.

Their 26,000 sq. ft. starter mansion could not contain everything they kept buying, with a seemingly unquenchable thirst for possessions.

At the peak, living Largest, David was making mountains of money hard-selling buyers of time-share vacation homes, getting them into Westgage Hotels with subprime mortgages many cannot afford.  How that ends is no secret.  Turns out, there’s so much more at stake than just a house, or just a hotel. Mr. Siegel had not put any money aside for his childrens’ education or financial future.

Jackie, the ex-model turned mogel trophy wife and loving mother, with the type-cast buxon Botoxed figure in too-tight clothes, spends with abandon, even as the couple goes broke and the mega-mansion goes on the market.  First, fluffy white dogs poop on the carpets.  Then a pet lizard dies with no water.  Then Jackie starts stuffing the stuff she buys into minivans.

The film was shot in the Siegel’s home over three years.

“Nothing makes me happy these days,” David says near the end, looking at the spoils of his salesmanship – and a house that surely will go down in the record books.

The home?  It sits today, as it sat at the end of the movie.  So if you know anyone looking for a house with 10 kitchens, a bowling alley, a grand ballroom, and an ice skating rink in a design that screams Las Vegas hotel (not French chateau), you may be in luck.  They aren’t.

The couple?  David is suing the film-maker, even though Jackie showed up at the premiere.  He wants to finish the house.